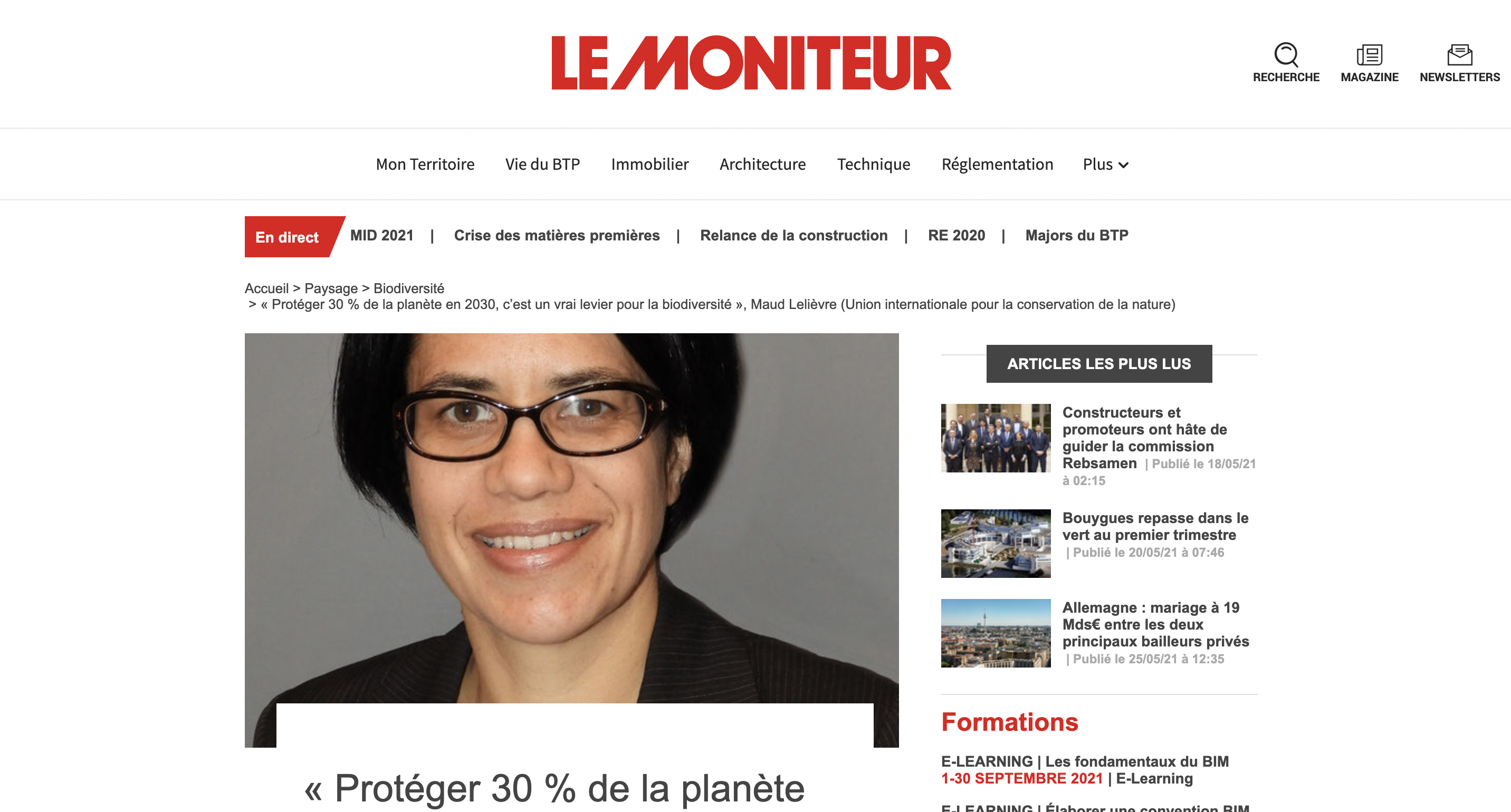 “Protecting 30% of the planet by 2030 is a real lever for biodiversity”, Maud Lelièvre (International Union for Conservation of Nature)

From 3 to 11 September in Marseilles, France will host the World Congress of the International Union for Conservation of Nature for the first time. Maud Lelièvre, president of the French committee of this organisation, which was founded in 1948 in Fontainebleau, is campaigning to open up a college for local authorities in addition to those of states and non-governmental organisations. The general delegate of the Eco-mayors sees this as a lever for translating commitments into regional planning.

What do you expect from the direct membership of local authorities in the International Union for Conservation of Nature?
Until now, members have been divided into several colleges, notably that of States and that of non-governmental organisations, with which major conservation organisations are associated. For the past 10 years, France has been promoting the idea of a new type of member, called “sub-national authorities”. For our country, this mainly concerns cities and regions, which would become full members with a weighted voting right.

The last two congresses in Korea and Hawaii did not succeed, largely because of conflicts between states and regions, particularly in Spain, or because of opposition from federal states. But we are hopeful this time, after the campaign led by the French IUCN Committee for the past five years.

Will the member communities bring a new dynamic of projects?
New memberships will be the result of a long process that will block applications from communities opposed to nature conservation. In this field, success depends as much on the commitment of States and NGOs as on the application in the territories. There is no such thing as nature protection above ground! If we publish a guide on re-streaming rivers and at the same time build dams, it doesn’t work.

Since 2007, the IUCN France Communities Group has been conducting research and publishing expert reports. The International Year of Biodiversity served as a trigger for this movement, starting in 2010. With its provisions on urban planning and the greening of buildings, the Biodiversity Act has accelerated it.

What specific messages would you like to send to the planning and construction world?
That people in these professions should prepare themselves for real change, and not tick boxes to fit in with a trend! Of course, reasoning in terms of turnover leads to the hypothesis of doing and then undoing rather than not doing, but the seriousness of zoonoses should lead to an end to this reflex and to push the economic reasoning: not building gives value to the heritage. I think that France has lost an opportunity to show this with its Cœur de ville programme, which could have frankly set the course for desealing. Environmental innovation responds to a demand from communities and citizens.

The French business movement has understood this by subscribing to the Acte4Nature. The business summit, as part of the Marseille congress, will express this commitment of business leaders on a global scale. This movement must be translated into greener cities. The post-Covid recovery offers a chance to make progress, if nature conservation is mobilised at 10% of the planned funding.

Why do you see the fight against climate change and the protection of biodiversity as two aspects of the same struggle?
Neither crisis can be solved independently of the other. In their first joint report published last June, the Intergovernmental Panel on Climate Change and the Intergovernmental Science-Policy Platform on Biodiversity and Ecosystem Services demonstrated this. Wetland loss and desertification increase temperature and reduce biodiversity. Deforestation increases the greenhouse effect.

The 1992 Earth Summit in Rio identified both issues. But if greenhouse gases and temperature are measured in the same way everywhere, the same cannot be said of the Caribbean mangroves and the Great Barrier Reef: the warnings do not have the same visibility. Today, we can no longer wait: biodiversity must be on the agenda of all countries.

Can we hope that the Marseille congress will mark a real turning point?
This event has taken longer to prepare, in a period of crisis that has changed the way we look at the issue, particularly with regard to species trafficking and its health impacts. Among the commitments expected in Marseille is the protection of 30% of the world by 2030. President Emmanuel Macron has already taken a stand to achieve this goal in France by 2022, last January at the “One Planet Summit”. Meeting this commitment requires joint work by states and local authorities, based on rigorous criteria on the status of classified areas, with its authorisations and prohibitions.

Protecting a third of the planet would be a real lever for achieving the objective of the preparatory text for the Convention on Biological Diversity, which the United Nations will finally convene in 2022, after a new postponement: stabilise biodiversity losses in 2030, then reverse the curve in 2050.