Biodiversity: “2021 must become the turning point” says Maud Lelievre, president of the French Committee of IUCN 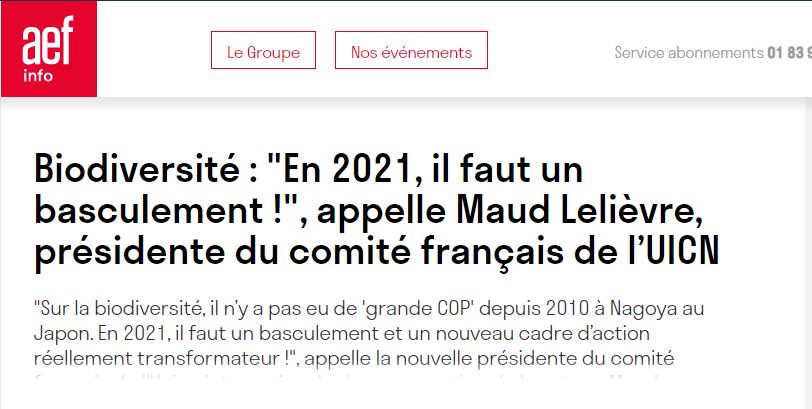 “There has not been a true COP on biodiversity since 2010, in Nagoya, Japan. 2021 must become the turning point for the establishment of a new framework for transformative action.” This call was issued by Maud Lelievre, the new President of the French Committee of the International Union for the Conservation of Nature, in an interview given to AEF info.   Ms. Lelievre views international platforms such as the World Conservation Congress, taking place in September, as an opportunity to rally all parties towards this goal. Beyond 2021, the French Committee will prioritize eight key issues, and will focus on working in partnership with local communities. The president also calls for biodiversity to be allocated its own budget, separate from the finances for climate change.

AEF info: What did you take away from the organization of One Planet on January 11th, the first summit to put the preservation and financing of biodiversity at the heart of its mission?

Maud Lelievre: The fundamental challenge is to successfully ensure that biodiversity does not remain in secondary place, but that it be given equal footing with Climate Change in terms of political priorities. So, the fact that a One Planet Summit has been held on biodiversity is good news.

In terms of notable statements, what I mostly remember is the convergence of the coalition in aiming to designate 30% of protected areas by 2030.  Keeping in mind that this goal is based on surface areas, we also need good management and to ensure that our relationship with local communities remains respectful.  The fact that more than 50 nation states have committed to this coalition represents a step forward.  I hope that they will be joined by others, and that this strong commitment will be adopted by all states participating in COP 15 at the end of the year.

Likewise, the launch of the Mediterranean coalition set for 2030, aligns with the French IUCN Committee’s collaboration with the Spanish Committee, as well as with all committees from the basin area. The idea is to collectively work on specific policies for this region. This coalition has made new commitments to fight overfishing, pollution, and to make maritime transportation more environmentally friendly … We will have to see how these measures will translate on the ground.   I would like to reiterate that the French Committee of IUCN has submitted a recommendation for combating plastic pollution, a major issue around the Mediterranean, to the International Congress on Nature, with the support of the WWF.  We have also collaborated with the Tour du Valat Foundation to deliver another recommendation to encourage nature-friendly solutions around the Mediterranean.  The identification of solutions constitutes the core of the debates that will be taking place at the Congress.

AEF info: Was there anything else that you took away from the summit?

Maud Lelievre:  The launch of the Prezode Initiative, with a focus on preventing the emergence of zoonoses, is another take away. Three IUCN members, including Inrae, CIRAD, and IRD, collaborated by mobilizing hundreds of researchers to address this important issue, when considering that 60% of infectious diseases affecting humans are linked to zoonoses. High expectations have been placed on this research to effectively address the links between environmental health, animal health, and human health. Research findings have linked the emergence of new infectious diseases, such as COVID-19, with the degradation of biodiversity.

Finally, this summit was an opportunity to consolidate a commitment against deforestation. In June 2021, the European Commission will be unveiling a legislative draft to combat foreign lumber imports resulting from deforestation. This was another recommendation advanced by the French Committee of the IUCN. France, which continues to apply its strategy against deforestation, had initially launched the alliance for the preservation of tropical forests in 2019, at the G7 in Biarritz.

AEF info: Were there any topics that were left out of the summit?

Maud Lelievre: I was left confused by the announcements made for the great green wall, which were framed as “promoting agroecology, although the project itself focuses on halting desertification. There were no clear stated goals for biodiversity, despite the allocation of a budget of fourteen billion dollars.  I had expected to see projects focusing on the ecological transition of agriculture around the world, given the pressures exerted by industrial agriculture on biodiversity.

It is also very promising that the French Development Agency will be allocating at least 30% of its budget for climate change to solutions protective of nature. While this is important and should be supported, we must also ensure that biodiversity is not relegated to becoming a line item in the budget for climate change.  Making use of the climate change budget to fund a solution protective of nature, while respecting the IUCN global standard, constitutes a joint win for both nature and climate change.  However, there needs to be a budget allocated to diversity, directed towards protected areas, protection of endangered species, research, and to support NGOs in the field.

Nevertheless, the summit played an important role in political mobilization during a critical year for biodiversity.  The COP 15 in China offers the opportunity for strong resolutions in matters of finance, the fight against deforestation, and ocean preservation. There has not been a “COP” on biodiversity since 2010 in Nagoya, Japan.  2021 must become a turning point and lead to a truly transformative framework for action!

AEF info: China appears to be aiming to adopt “reasonable and workable” targets. Isn’t that contradictory?

We must urgently respond to the disappearance of biodiversity by implementing concrete and sustainable actions. This constitutes a key point of the biodiversity strategy to be adopted at the COP. We call for states to provide regular progress assessments based on common and reliable indicators by 2030. We maintain regular exchanges with IUCN President Zhang Xinsheng, who is Chinese, and China has become a country with a high number of organizations dedicated to conservation. They want to see progress being made.

This is also why it is important to hold the One Planet Summit at the beginning of the year, thereby allowing time for diplomacy and multiple exchanges to take place, and to move forward to include: the Africa-France summit, the IUCN Congress, the United Nations General Assembly, the summit of the three COPs…These events constitute multiple stages and offer opportunities to bring together multiple points of view and to build consensus.

AEF info: As chairman, what are the priorities of the French IUCN Committee?

Maud Lelievre:  The French Committee holds second place in the world in terms of membership, behind the United States as number one, but ahead of China.

A high priority is the organization of the IUCN World Congress and the finalization of a rich program, for its rescheduled dates (September 3-11) in Marseille. The Congress was supposed to have been held two years ago, prior to the COVID crisis.

In terms of the organization of the Congress and beyond, we will continue to mobilize our members, working groups, and expert commissions on eight key issues: endangered species, preservation of ecosystems, protected areas, solutions based on the protection of nature, biodiversity in overseas territories, imported deforestation, the artificialization of soils, as well as alternatives to pesticides.

We also hope to collaborate more closely with local communities. The French Committee will present a motion on this topic during the Congress.  Although this motion was rejected in 2016 in Hawaii, we remain hopeful that it will be adopted this year, leading to a change of statutes for the IUCN, and resulting in the membership of local communities, who retain high expectations for the preservation of biodiversity. These communities can use their role as stakeholders in grassroot initiatives to accelerate progress.

AEF info: In terms of progress, where are the motions prepared by the French Committee for the Congress?

Beyond the debates on these motions, four summits will be held during the Congress. The first one will focus on youth, the second one on local communities, a third one on businesses, and the fourth one on indigenous peoples.

Furthermore, several conferences for scientists and practitioners will take place during the first phase of the Congress, with a forum mobilizing the knowledge of 1,300 organizations and 15,000 IUCN experts. The strength of the IUCN comes primarily from this network of experts. Moreover, the COVID-19 crisis has revealed the necessity for cooperation, and as such, France could become more engaged by providing its resources, expertise, and by sharing and making available its data to other nation states.