The postponement of the Uicn Congress in January should make us more demanding in our ambitions and our speeches. Read our joint analysis published today in Time of India. 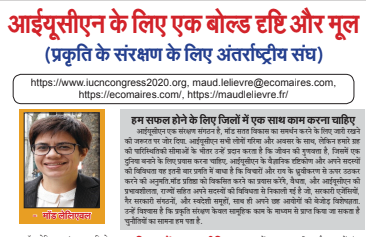 This week, the World Conservation Congress should have been held in Marseille. For three years, the French committee has been actively preparing it, to present 26 major recommendations to protect the world’s biodiversity.

These French recommendations call for a reinforcement of the protection of large ecosystems, such as the ocean, coasts, forests, mangroves or mountain streams, as well as that of threatened species such as great apes, marine mammals or herbivorous fish in coral reefs. They will also make proposals to halt or reduce major pressures on biodiversity such as plastic pollution of the seas, soil artificialisation, mining activities, sand removal, pesticides, wildlife trafficking and deforestation. The key role of protected areas will also be particularly stressed, as will the importance of environmental impact assessments and funding dedicated to biodiversity. Finally, the emergence of nature rights, which make it possible to strengthen the legal protection of the environment and lay the foundations for a new ethic with nature, will be supported.

France is today the 2nd country with the largest number of IUCN members in the world after the United States and the holding of the Congress, even delayed by a few months, must be THE MOMENT of COLLECTIVE AWARENESS so that the stakes of biodiversity are as important as those of the climate, and put forward solutions to achieve this.

Convinced by the need to work collectively, we are thinking with our friends in the Indian Committee about common solutions. The links I have built there since my participation in the Hydérabad conference in October 2012 (COP-11) lead us to these reflections, published today in Time of India.